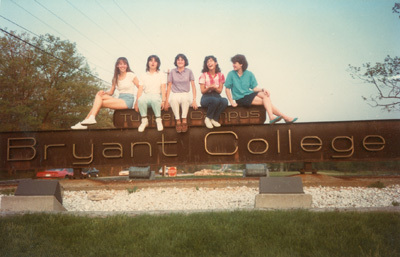 Color photograph of the original campus entrance sign located at 1150 Douglas Pike, Smithfield, RI. This sign was constructed in 1971 and was replaced in 1997 and then updated in August 2004 when Bryant College became Bryant University. Bryant's campus is also known as the "Tupper Campus" named after Earl Tupper (of Tupperware fame) who generously donated 220 acres to Bryant for a new campus.