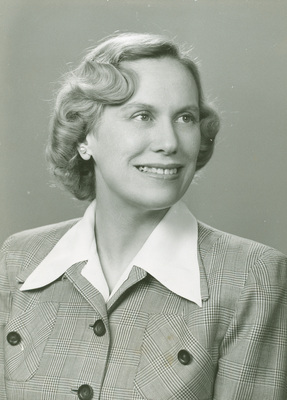 Gertrude Hochberg was Director of Public Relations at Bryant from 1949-1975 and Bryant's first female Vice President from 1975-1977. As part of the college leadership team she helped to gain national recognition for Bryant.

In 1963 she organized Bryant's first symposium on the "Status Women in America" and subsequently she was invited by RI Governor John H. Chafee to form the Rhode Island Commission on the Status of Women.

In 1972 she arranged and publicized Bryant's "Symposium for the Advancement of Women in Business" which brought 500 career-minded high school seniors and their counselors together with leading women executives.

Hochberg received numerous award during her career. On May 16, 1977, she became the first woman to be inducted into the Rhode Island Hall of Fame.