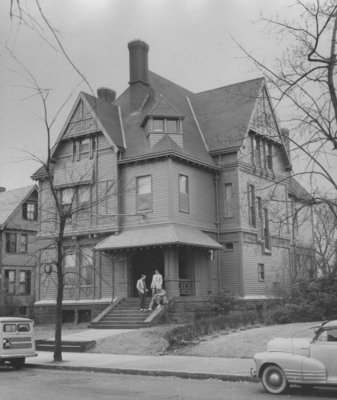 Photo of Parks House at 87 Cooke Street, Providence, RI. Parks House was purchased by Bryant President Henry Jacobs in 1952 and leased to the college for use as a men's dormitory. Bryant purchased this residence from Jacobs' son E. Gardner Jacobs in 1963 after Henry Jacobs' death earlier in the year.

Parks House was named after George Mansfield Parks, a manager of the Massachusetts Mutual Life Insurance Company in Providence and Bryant honorary degree recipient in 1933.

Since 1934, Bryant has presented the George M. Parks Award to the bachelor’s degree candidate who has done the most to enhance the reputation of the University through recognized leadership qualities.