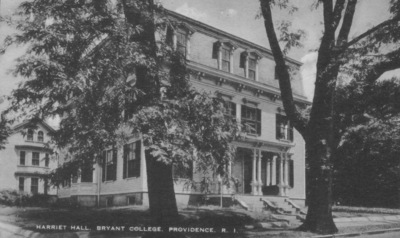 Postcard of Harriet Hall located at 71-73 Charlesfield Street in Providence, RI. Harriet Hall was named after Bryant President Henry Jacobs' first wife, Harriet "Hattie" Einstein Jacobs. Hattie Jacobs was born in Kitanning, Pennsylvania and died in 1930 after a long illness. She was the mother of Dorothy Jacobs and E. Gardner Jacobs, President of Bryant from 1961-1969. Throughout her life she had been active in welfare and philanthropic work.

This wooden framed building (9,800 sq. ft.) was constructed in 1921 and was used as a women's dormitory housing 36 students in addition to a house director in a one room apartment. When Brown University acquired Bryant's East Side Campus in 1969, Brown renamed this building Milhous.