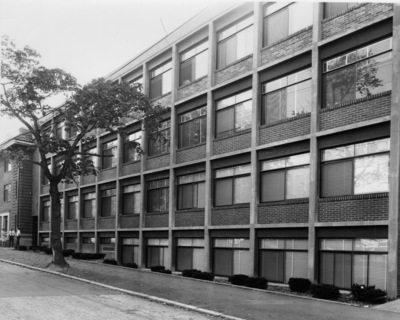 Appleby Hall located at 100 Charlesfield Street in Providence, RI was a Bryant College dormitory for men. Appleby Hall was named after Ray Lucien Appleby, Class of 1927. Lucien was employed by Bryant from 1928-1932 and then returned to the college in 1938 and remained until he passed away on June 14, 1968. During these years Lucien held various positions - he was a faculty member in investments from 1928-1956, then was secretary and assistant treasurer, and trustee, and in 1961 was elected treasurer and vice president of the college.