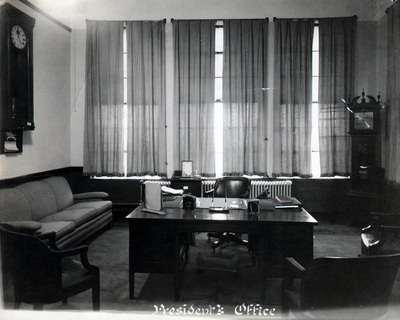 Black & white photo of the office of Bryant’s former president - Henry Loeb Jacobs, president of Bryant from 1916-1961. This office was located in the Gardner Building, 40 Fountain Street, Providence, RI, Bryant's home from 1925-1935.

The grandfather clock seen in the photo eventually ended up in Bryant's Administration Building at 154 Hope Street when Bryant moved to Providence’s East Side in 1935, From 1971-2014, this clock could be found behind Bryant's Smithfield campus in the 1708 house known as Alumni House. In 2014, the grandfather clock was moved to the Douglas and Judith Krupp Library