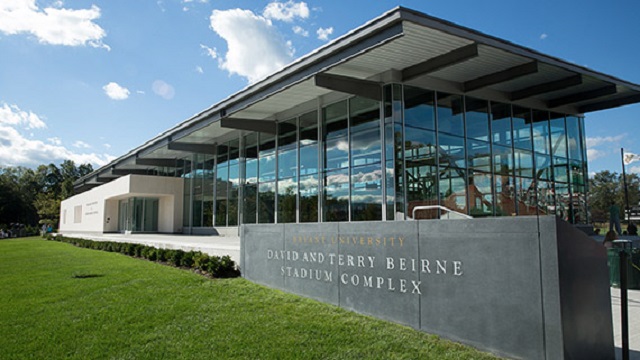 On September 24, 2016 Bryant’s stadium complex, including the world-class Bulldog Strength & Conditioning Center, recipient of a Facilities of Merit Award from Athletic Business magazine, was dedicated in the name of David M. ’85 and Terry Beirne.

Beirne, a legendary advocate of the “go big or go home” philosophy, is Chairman and cofounder of Fantex Holdings, Inc. He previously was a general partner at Benchmark Capital, the Silicon Valley venture capital firm that was one of eBay’s earliest investors. He has served as a Bryant University Trustee since 2003. Beirne and his wife, Terry, are among the University’s most generous philanthropists and have made leadership gifts that provided substantial funding for the expansion of Bulldog Stadium and construction of the Bulldog Strength & Conditioning Center, both equal to some of the finest NCAA Division I facilities in the country. They have donated $7 million for enhancements to the Stadium Complex, athletic programs, and student scholarships. “Bryant attracts student-athletes of the highest character, work ethic, drive, toughness, and leadership,” said David M. Beirne ‘85, a former lacrosse player and 2016 Bryant University Athletic Hall of Fame inductee. “The transition to Division I has been extraordinary.”

The Beirne Stadium Complex includes the 4,400-seat Bulldog Stadium, the centerpiece of Bryant University's outstanding athletic facilities, and utilizes a design consistent with much larger stadiums, ensuring excellent sight lines and maximum comfort for spectators. The facility began construction in 1998 to coincide with the varsity debut of Bryant football, and in 2009 the stadium underwent a transformation commensurate with competition at the highest level of collegiate athletics. Since that time the complex has been upgraded and changed as new locker rooms were added and one of the nation’s best-designed training facilities, the Bulldog Strength and Conditioning Center, was constructed. Opened in August 2015, the award-winning 10,000-square foot Bulldog Strength & Conditioning Center serves more than 550 student-athletes across 22 Division I sports and all Bryant Club sports teams. The facility is a superb model for other institutions and has been a resounding success in its first year, allowing Bulldogs to train with better equipment in less time as a team, resulting in stronger, faster athletes.