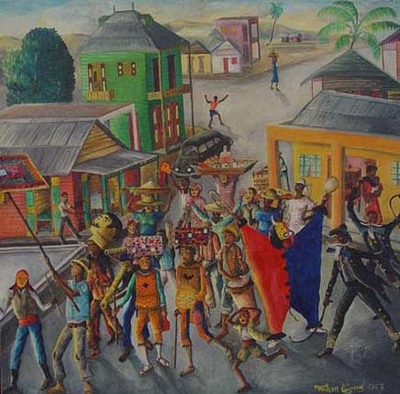 Bigaud, one of the major names in Haitian painting, started his art career as a clay sculptor. He was dissuaded from continuing in this medium by DeWitt Peters, who recognized his exceptional creative gift. Peters was a driving force in the founding of the Centre d'Art and put Bigaud to work on canvases at the Center, where some of Haiti's most talented artists took lessons, painted, exhibited, and sold their work.

In 1950, at age 19, he won second prize at an International Exhibition in Washington, D.C. for his canvas entitled "Paradise", which is now in the permanent collection of New York's Museum of Modern Art (MOMA). That same year, he painted his masterpiece, "The Wedding at Cana", which is one of several magnificent murals in the Holy Trinity Episcopal Church in Port-au-Prince.

In 1957, suffering from acute depression, Bigaud stopped painting almost entirely. In 1961, seeking help, he entered a mental institution for several months, then sought peace from his demons by retreating into family life in Petit-Goave. (It is said that DeWitt Peters believed that Bigaud was afraid of losing his gift. It is also said that some of his friends even believed that Bigaud had made a pact with a "houngan" (Voodoo priest) to preserve his talent.) He took up his paint brushes once again in the mid-sixties, but his talent had lost some of the fire and majesty of his earlier years.

Selden Rodman, a foremost authority on Haitian art and culture, writes of the wonders of Bigaud's early works in his 1988 in-depth treatment of Haitian Art ("Where Art is Joy - Haitian Art: The First Forty Years"). He speaks of the "joy of art that sparked all the Bigaud paintings" until his painful retreat from reality. Rodman observes that when Bigaud started painting again, he was not the same artist, and that his paintings reflected more fear and defeat than his early works, which were joyous and triumphant.

In this canvas and "Village Wedding" however, which were both painted in the late sixties, he appears to have regained some of the elan and spirit of his earlier works.