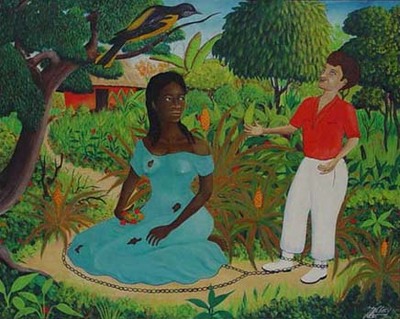 Chery always painted as a young man, but to support himself worked first as a barber, then as a gas station attendant. In 1961, he joined the Centre d'Art in Port-au-Prince, subsequently exhibiting abroad.

Although initially rendering mostly historical scenes and scenes from daily life (some of which are considered among Haiti's more important works of art), Chery appears to have later taken greater delight in painting more whimsical canvases. His paintings of children and child-like merchants carrying larger than life bowls of fruit on their heads, for instance, are very popular, but not great works of art. And his charming renditions of the popular means of transportation in Haiti, the colorfully and humorously decorated Tap-Tap, are also done with a great sense of joy.

This painting is Chery's artistic rendition of one of Haiti's most popular songs of all time, entitled "Choucoune", which is a girl's pet name. The song tells of a young man's undying love for his fair "Choucoune". Harry Belafonte wrote a popular English version of the song called "Don't Ever Leave Me", which is also known as "Yellow Bird".

Here is a direct translation of the original Haitian version, the words of which were penned by Haiti's most famous poet, Oswald Duran: