Countryside I and II (Paysage I and II) 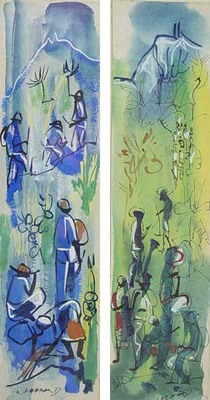 Lazard is of the modernist school of Haitian painting, rather than the "naive". He studied painting and sculpture at the Centre d'Art from 1945 to 1950 and in Paris from 1951 to 1953. He was among those who, on August 12, 1950, separated from the Art Center and founded the "Foyer des Arts Plastiques" (Fine Arts Foyer). This was a group who considered themselves more advanced and sophisticated than the primitive artists and wanted to put some distance between the two styles. He subsequently exhibited in Mexico, the U.S., Puerto Rico, Spain, Brazil, and Cuba.

Lazard emigrated to the U.S. in 1956 and continued to exhibit throughout the U.S., Canada, and Haiti.