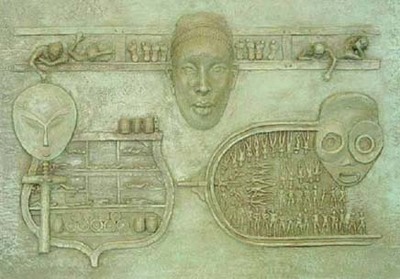 "The design of the slave ship is compelling evidence of the brutality and the fallacy of the utilitarian argument that slavery produced the greatest good for the greatest number of people. It also challenges the premise that what is efficient and profitable is therefore justified.

It is important to note that Newport, Rhode Island, was the center of the infamous 'triangle trade' in which rum distilled in Newport in over twenty distilleries in the 1700's was shipped to the West Coast of Africa and traded for slaves who were then returned to Newport so that the triangle could begin again. Almost half the slaves died in transit from disease and abuse.

On the slave ship every available space, horizontal and vertical, was used to maximize the human cargo. Men, women, and children were held separately; only the men were shackled to each other at the ankle in pairs, making it impossible for them to even turn around.

More devastating than the physical suffering was the psychological trauma of being trapped and helpless, anticipating an unknowable and dreadful plight. The violence was more spiritual than it was physical, meant to reduce human beings to docile and tamed animals.

In this work I have made the sculpture a flat relief so as to mimic the flat architectural plan of the ship. I made each human figure to be unique, moving, twisting, writhing, and languishing in dread. In mute witness to this horror I have imposed three African figures which are exact copies from the native sculpture of the African tribes that were the sources of slaves. Each mask expresses a silent judgment of the human degradation that surrounds it."

The figure at the left is an Ashanti fertility doll. It is placed in the cross-section of the ship, showing how the female slaves were aligned and the special humiliation they were subjected to. The doll squints its eyes and mouth in stern rebuke to those who do not see the spiritual brutality before them.

The face on the right is from Lagos: a very sophisticated abstraction with clever reversals in the structure of the eyes which dominate the face in horror and amazement.

Additional Files
HaasTheSlaveShip3.jpg (43 kB)
"The small figures of slaves appear also to be masks, staring at the viewer. They are also lying naked with body shapes as commonplace as those of the viewers. There is at least this common bond of humanity. In sculpting each figure (71 of them) I tried to physically sense in my own body the tension and anguish of each individual slave. To the extent that this is spiritually and aesthetically possible, I was trying to touch them in their suffering."
HaasTheSlaveShip2.jpg (28 kB)
The central figure, a bronze from Ife (10 to 13th century) has the dignity, poise, and elegance of a great personage. The vertical lines on the face bring out its amazing structure and demonstrate the technical and artistic skill of the sculptor.