A chapter included in the book titled, Political Theory on Death and Dying : Key Thinkers edited by Erin A. Dolgoy, Kimberly Hurd Hale, and Bruce Peabody.

"This chapter analyzes the political function of death in Michel Foucault’s elaboration of biopower. It begins by unpacking the biopolitics of death in Foucault’s 1975–6 lecture course at the College de France, Society Must Be Defended, and the biopolitics of life in his groundbreaking book, The History of Sexuality, Volume 1. In the lectures Foucault emphasizes the role of race and racism in biopolitics; in the The History of Sexuality, published after the lecture course, Foucault mentions race only tangentially, instead declaring sexuality the central mechanism through which biopower operates. The chapter jumps forward chronologically to Foucault’s 1981–2 College de France course, The Hermeneutics of the Self, to examine his lectures on ancient philosophical practices of self-care and death preparation. Finally, it concludes with an analysis of a relatively glib short essay on suicide, “The Simplest of Pleasures”, that Foucault wrote for a queer Parisian periodical,Le Gay Pied." -- Publisher 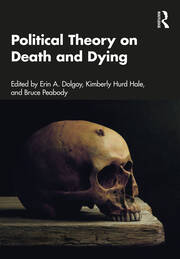