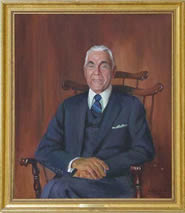 Gulski, Class of 1926, began his association with Bryant as a student in 1924. A certified public accountant, Gulski had been a former Bryant faculty member and a much beloved dean. As a result, Gulski was amply prepared to step in as acting president when Shuyler Hoslett resigned due to illness and again in 1975-1976 after the reign of Harry Evarts.

Gulski provided the wise and compassionate leadership the college needed during the turbulent spring of 1970. The year 1969-70 was a time of crisis in the nation, and campuses everywhere felt the repercussions, especially in the spring of that year. He provided the same stable and dedicated leadership in 1975-76.

In 1972, Bryant awarded Gulski an honorary Doctor of Science in Business Administration. In celebration of Bryant's 20th anniversary in Smithfield in 1992, Gulski received an honorary MBA degree along with others instrumental in the success of the college.