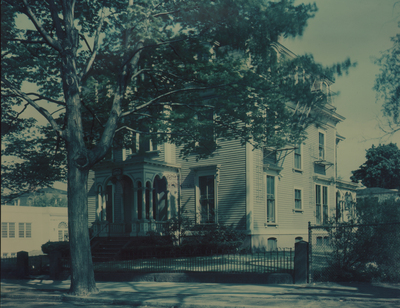 Color photo of Eldridge Hall located at 79 Charlesfield Street in Providence, RI. Eldridge Hall was a Bryant College women's residence from circa 1944 until 1971 and was probably named after Edward H. Eldridge, former Director of Secretarial Training at Simmons College, an honorary Bryant alumnus (1934) and frequent visitor to the college.

This building consisted of 13 rooms housing 30 students and a one room apartment for a house director. Bryant President Henry Jacobs purchased this once private residence from Gladys A. Gilmore in October, 1944 for $15,000 and leased it to the college. Bryant officially purchased Eldridge Hall on November 11, 1963 and sold it to Brown University in 1969. In 2007, Eldridge Hall became a residence for scholars in residence at the John Carter Brown Library.

Memorial Hall, no longer extant, is to the left.