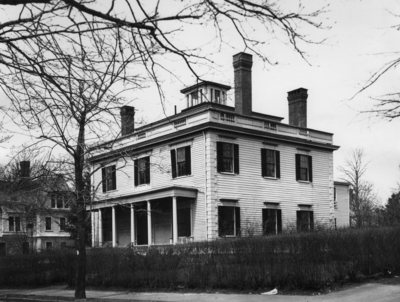 Dyer House was designed by architect John Holden Greene in 1818 for his own use.

This property was acquired by Bryant in 1956 for $35,000 and was subsequently converted into a women's dormitory. The Barn Studio was included with this purchase.

When the college bought this house it did so with the stipulation that it could not be torn down. Dyer House was moved from 154 Power Street to 150 Power Street for the construction of Gardner Hall in 1959/1960. It was said that the house was very difficult to move as, unbeknownst to the movers, it was brick with wood covering.

The house to the left was the old Bryant Faculty House which was destroyed in 1965 for the construction of a student activities center.

Dyer House was sold to Brown University in 1969.