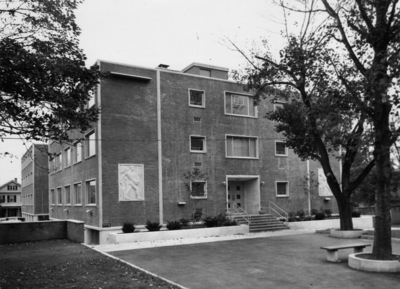 Black and white photo of Gardner Hall located at 154 Power Street, Providence, RI. Gardner Hall was named after E. Gardner Jacobs, who was Bryant's President from 1961-1968 and who had, up to 1960, served Bryant for 39 years.

This photo was taken from the courtyard side of the building. The house to the left in the back of the photo is on Power Street.

Gardner Hall, which was a men's dormitory, opened in the fall of 1960 and was dedicated December 3, 1960. This building housed 178 male students, a student health center, a study hall, and a kitchen for student use. Gardner Hall was sold to Brown University in 1969.