Malcolm Forbes and his Jet, Capitalist Tool - May 1976 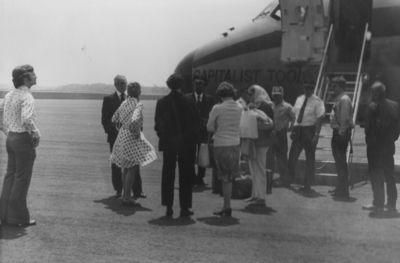 Black and white photo of Malcolm Forbes being greeted in Rhode Island after disembarking from his plane (DC-9) named Capitalist Tool. Forbes came to Rhode Island on May 21, 1976 to attend Bryant's commencement on May 22 where he received a Doctor of Science in Business Administration. Malcolm Forbes is the man chatting with the woman in the polka dot dress. The person in the far left is Bryant student, Kevin Goulin.