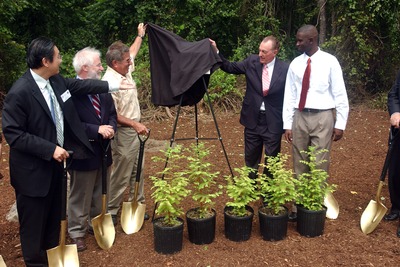 Photo of metasequoia planting ceremony, August 7, 2006. Five metasequoias were planted on Bryant's campus in the field west of John Mowry Road and north of the utility road (behind the Unistructure). Pictured in the photo are Professor Hong Yang (first from left) and President Ron Machtley (fourth from left).

A plaque at the site reads:

"A deciduous conifer of the family Cupressaceae Rich. ex Bartling. Named as the tree of the 20th Century, The Metasequoia fossil record goes back to 100 million years. Living Metasequoia trees were discovered in the 1940s in South-Central China through collaboration between Chinese and American Scientists

Dedicated by the U.S.-China Institute at Bryant University and participants of the Second International Metasequoia Symposium