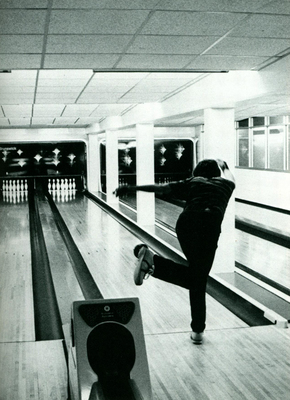 Photo of the former Bryant bowling lanes located in the underground walkway from the Unistructure to Koffler. The bowling alley was constructed in 1976 as part of the new student center (Koffler). Bryant's student center was located in Koffler from 1976-1986. In 1986 the student center moved to the newly constructed Bryant Center now known as the Michael E. '67 and Karen L. Fisher Student Center. In 1987, when the Koffler Center was transformed into a technology center, the bowling alley was removed to make way for a classroom with 31 IBM Personal System/2 computers.