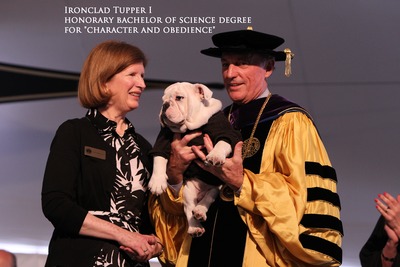 Photo of Ironclad Tupper I receiving a Bryant honorary degree for “character and obedience” in 2010. Also pictured are Ron and Kati Machtley.

In 2010, in celebration of record student contributions to the 2010 Class gift campaign, Bryant President Ron Machtley and his wife Kati searched for an appropriate gift. They always hoped that Bryant University would have its own live bulldog mascot. So Ron and Kati purchased and donated to Bryant, in honor of the fantastic class of 2010, a most lovable, tenacious scholar, and wonderful mascot, Ironclad Tupper I -- an English bulldog, just 18 weeks old (May 2010) complete with Bryant school character and spirit. He joined Bryant from the Ironclad Kennels in Raynham, Massachusetts and was trained and nurtured under the love and tutelage of Bryant employees, Claire and Tina Senecal. The Bryant community was introduced to the adorable Tupper I on Wednesday, May 19, 2010 in the Koffler Rotunda.

On December 6, 2017 Ironclad Tupper I, passed away suddenly following an apparent stroke during Bryant’s Festival of Lights celebration in the Koffler Rotunda. His caregivers stated that he died "doing what he loved — being adored."

Upon Tupper's death President Machtley, in a memo to the Bryant community, stated:

"Tupper was Bryant’s first official school mascot and a wonderful symbol of grit and determination for the Bryant community. He was bright, friendly, and always willing to lend a paw when needed to cheer on Bryant’s athletic teams or to welcome new students. His attendance at Bryant events will be sorely missed.

Tupper I will always be remembered as the first in hopefully a long and proud line of terrific, tenacious Bulldog mascots. No school could have asked for a better, more loyal, and friendly mascot. Ironclad Tupper I was much loved and his memory will always be cherished."