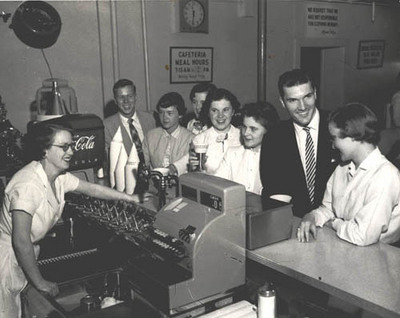 Black and white photo (circa 1956) showing students at the Bryant College Snack Bar. The campus was located on the East Side of Providence at this time. In 1956, Bryant College began construction of a two-story colonial style brick building on Young Orchard Avenue. While the first floor was dedicated to classroom space, the second floor of this new building housed a new dining hall with a seating capacity of 420, a faculty dining room, and a kitchen. The old cafeteria became a student union, a television lounge, and the Bryant College Snack Bar. Among the ice cream offerings were twenty-five cent milk shakes and twenty-cent sundaes. Sodas and sandwiches were also offered. Old cafeteria signs can still be seen on the walls in the photo's background stating the cafeteria meal hours and "Meal Tickets $5.50 value for $5.00." An enlargement of this photo was later placed on the wall of the Heritage Room located in the Bryant Center building of the Tupper Campus in Smithfield, RI.