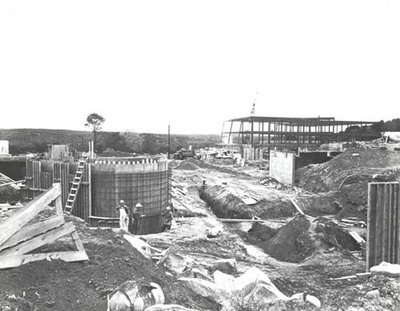 Black & white photo from September, 1970 shows the first stages of groundbreaking and framing the Bryant College Unistructure at the new campus in Smithfield, RI. Construction workers can be seen in the foreground. Twenty-eight year old architect Robert Hillier from New Jersey was hired in February, 1969 to design the new campus. The Gilbane Company was awarded the contract to build the Unistructure at a cost of $7,500,000.00. The Unistructure was completed in seventeen months and one day after groundbreaking with costs being kept within a very tight budget.