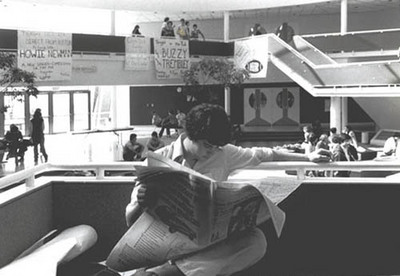 Black and white photograph taken in 1977 shows students relaxing between classes in the Rotunda of the Unistructure at Bryant College. The Rotunda has historically served as a gathering place for students, a venue for announcements as can be seen in the posters hanging from the balconies in the background, special events and meetings as well as Commencements in the early years of the Smithfield, RI campus. Later Commencements became too large to be accomodated by the Rotunda's available space though ROTC Graduations continued to be held there.