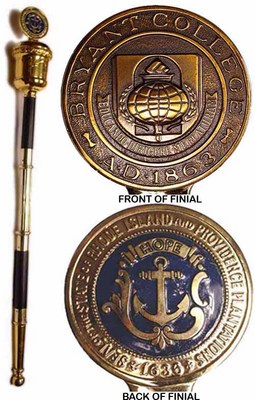 The Bryant mace is carried at commencement and convocation exercises and at other Bryant celebrations. Crowned in gold, the finial on top of the mace has the two dominant emblems of the institution: the seal of the State of Rhode Island and the seal of Bryant.

The central symbol of the seal is an ellipsoid globe with quills on each side to signify the traditional emblem of communication in business. In the center, behind the globe, is a torch symbolizing liberty, the spirit of free inquiry, academic freedom, and learning. The Archway, forming the background for the globe, torch, and quills, is a Bryant landmark, which is affectionately remembered by thousands of alumni. The Latin motto, shown here, says: "Educando Dirigere Mercaturam" - Education for Business Leadership.

The inscription on the mace reads:

What follows is the story behind the design of the Bryant College mace, according to a letter, dated January 20, 1965, by W. Daniel Lemeshka of The Gorham Company, Providence, RI, to Mrs. Gertrude Meth Hochberg, Director of Public Relations, Bryant College, 154 Hope Street, Providence, RI.

"The Bryant College crowned mace is an excellent example of this time-honored ceremonial symbol.

"Originally, the mace, as the most ancient weapon known to man, symbolized only the power of physical strength. From its earliest form as the trunk of a young tree on which is left the root head, through the additions of metal and spiked heads, its authority lay in its appearance as a club for striking.

"During the latter part of the 16th Century appeared the first reference to the crowned mace, an adaptation to symbolize the power of authority as well as strength. .

"This decorative crown is visually attached to the shaft of the mace by means of a circle of stylized acanthus leaves which joins these symbols of authority to the frieze ornament representing the lamps of learning to the arch symbol that portrays the scholastic halls of Bryant, (And the arch, I understand, relates to your famous archway on campus.)

"The golden hues of these elements are picked up again in the center shaft section which is circled with the typical heraldic symbol of geometric diamond shapes. In turn this gold is sharply contrasted to the deep-grained walnut shafts used on two portions of the mace to provide the necessary grasping areas."