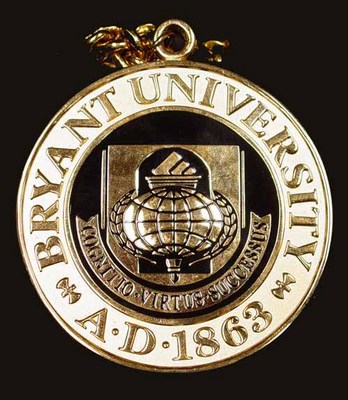 The Bryant University medallion is worn by the president during academic ceremonies such as commencement, convocation, and the bestowal of honorary degrees. The medallion bears a likeness of the University seal.

The central symbol is an ellipsoid globe with quills on each side to signify the traditional emblem of communication in business. In the center, behind the globe, is a torch symbolizing liberty, the spirit of free inquiry, academic freedom, and learning.

The Archway, forming the background for the globe, torch, and quills, is a Bryant landmark, which is affectionately remembered by thousands of alumni. The Latin expression on the seal "Cognitio Virtus Successus" means "Knowledge, Character, Success." Since its founding in 1863, Bryant University has been building the knowledge and character of its students to help them achieve success.

The formal installation of presidents is marked by the presentation of the medallion by the Chairman of the Board of Trustees to the president.