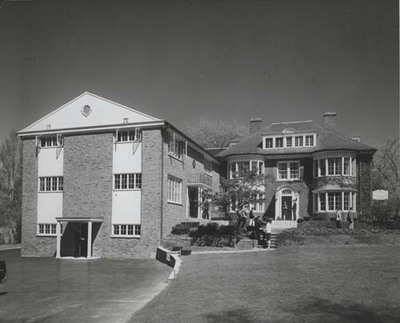 Black and white photograph of Bryant College's Henry L. Jacobs Library on 128 Hope Street, Providence, RI. One of the measures the new college president, E. Gardner Jacobs, took to get the college accredited by the New England Association of College and Secondary Schools (NEASC) was to increase the library's holdings. In 1961, the school bought a large mansion at 128 Hope Street, which was the former residence of Philip P. Simonds, and converted it into a library. The new wing (on the left), was added a year later, providing an additional 5,000 square feet of space. The Class of 1962 contributed funds towards this expansion. Bryant College achieved NEASC accreditation for the first time in 1964.