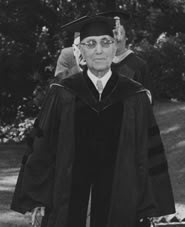 Dr. Henry L. Jacobs, born in Dayton, Ohio, 1875, and president of Bryant from 1916 to 1961, was educated in private schools and at the University of Michigan. Early in life, he became the official reporter for the Pennsylvania legislature. At the conclusion of his work there, he founded a business school in Dayton, Ohio known as Miami-Jacobs College.

Jacobs came to Rhode Island in 1907-1908 as the director and owner of The Rhode Island Commercial School which he purchased from Adelbert S. Heaney. In 1916 he merged this school with the Bryant and Stratton Business School, when the president of that school, Theodore Stowell, was nearing retirement. This new school, located in the Butler Exchange building in downtown Providence, Rhode Island, was named Bryant and Stratton Rhode Island Commercial School. During his extraordinary tenure at Bryant, from 1916-1961, Dr. Jacobs was considered a pioneer in business education as the school underwent substantial change and growth. At an alumni homecoming banquet in May 1955, Dr. Jacobs was publicly cited for “A Half Century of Distinguished Service to Business Education.”

A keen businessman as well as a showman, Dr. Jacobs can truly be considered the "father" of Bryant University as it is known today.