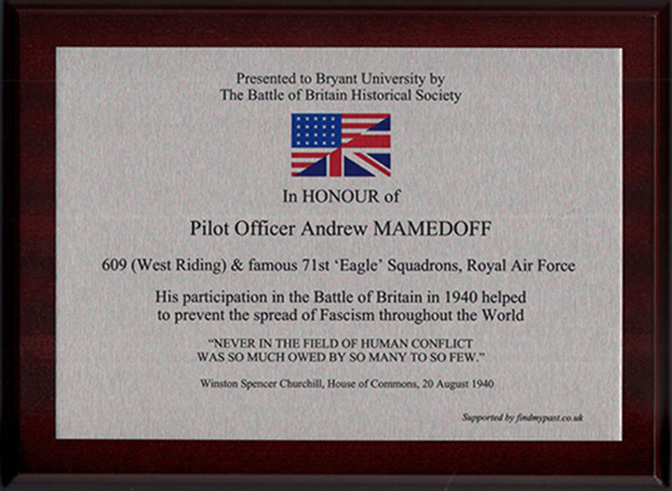 Andrew Mamedoff was a member of the Bryant College Class of 1932. No letters were received by the Bryant College Service Club from Mamedoff because he was killed before the Club was formed and prior to U.S. involvement in World War II. He is, nonetheless, included here because of his historically significant and heroic contributions to the war effort.

Mamedoff was one of the first three Americans to join England's Royal Air Force becoming a member of No. 71 Squadron, later known as the original Eagle Squadron. A series of articles in Liberty Magazine entitled "Yankee Eagle Over London" were published in 1941 and recounted the story of this American trio as they helped defend Britain against Nazi Germany.

Since that time Mamedoff has been included in numerous historical publications regarding the Battle of Britain and airforce history including Alex Kershaw's The Few.

Mamedoff was a native of Thompson, Connecticut and was a member of Bryant's Tau Epsilon fraternity. Many of that fraternity's parties were held at The Russian Bear in Putnam of which his mother was manager.

Mamedoff was killed when his plane crashed October 8, 1941 while flying from England to Northern Ireland in poor weather conditions.

The Battle of Britain Historical Society recognized Mamedoff 72 years later, for helping "to prevent the spread of fascism throughout the world" and presented a plaque, in his honor, to Bryant University.