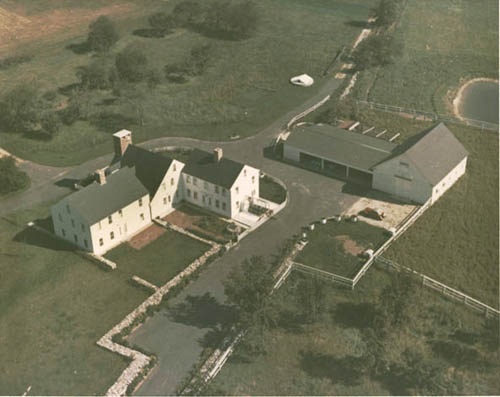 Mowry Alumni House was once the home of Captain Joseph Mowry (1675 or 1676-1721?) -- son of Nathaniel Mowry (1644-1717), one of the original settlers of northern Rhode Island. This house was built in 1708 and remained a "Mowry" home for about 160 years. Owners after the Mowry family included the Keefe, Emin and DeCotis families. In 1954 the house was purchased by Earl S. Tupper and upon acquiring the property Tupper moved the house and connected it to another house built around 1767 with a new addition. Mr. Tupper donated this homestead to Bryant on October 23,1967. In June 1970, during campus construction, the Mowry homestead was moved once again to its current location.

Mowry homestead after move, Smithfield, RITo learn more about the Mowry family consult The Descendants of Nathaniel Mowry of Rhode Island via Google books. Chapter 2 includes information about Captain Joseph Mowry and a history of the 1708 house that was published in the Providence Journal in September 1876.