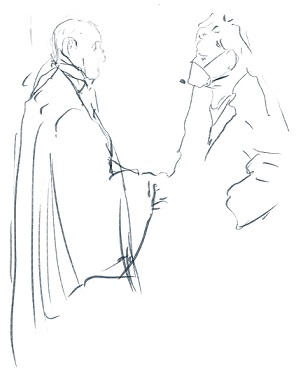 Imam Farid Ansari has been the Imam of the Muslim American Dawah Center of Rhode Island since 1987 and is a former President of the Rhode Island Council for Muslim Advancement. He recently retired from the Rhode Island Department of Children, Youth & Families after 20 years, but much of his employment and livelihood has been in law enforcement.

“I’ve served in several different positions. I was a court officer, I was a Corrections Officer, and a New York City Police Officer because I’m originally from New York.”

Imam Ansari was not born into the Muslim faith.

“I was 18 years old when I finally learned about the religion of Islam. I was raised Catholic, but I embraced Islam in 1966. Since that point in time, it’s been a growth process.”

Imam Ansari studied in Cairo, Egypt, learning the Arabic language and has made Hajj [pilgrimage to Mecca] twice.

“Friday is our day of Jummah, day of congregating, usually around 1 o’clock. Our five daily prayers would traditionally be said in the Masjid, so the mosque would be open during the five daily prayers, but COVID impacted that. There were limitations put on the five daily prayers. There was social distancing and mask-wearing, which had an enormous impact in terms of our daily routine. During our prayer we literally come shoulder to shoulder, it’s very close knit. Our traditional way of praying had to be modified for social distancing and other restrictions we had to follow.”

“We are encouraged to pray in the Masjid in congregation. That had to be modified. In some instances, there was no prayer in the Masjid. Early on, it was completely shut down, it was prohibited. And once the Masjid opened, it was with a capacity limitation to allow for social distancing. For Fridays, you had to call and reserve in some mosques. Once that capacity was filled, others were encouraged to stay at home. Many people did it anyway, voluntarily.”

“It was a strange time. But there are Hadith or Islamic sayings [a major source of guidance for Muslims apart from the Quran] for these times as types of plagues and sicknesses have occurred historically. For instance, when there is a disease, you’re not supposed to leave that place. To not spread it, you don’t travel from that place, nor do you go to that place.”

“You might say there was a certain degree of anxiety, as we were not doing our communal duty. It’s very important to pray in congregation daily, as well as on Jummah, and in those major gatherings at the end of, the Eid al-Fitr.”

In 2020, only around 1,000 pilgrims – a far cry from the usual 2 to 3 million – attended the Hajj because of crowd control restrictions put in place by Saudi Arabia.

To Imam Ansari, “this showed the global impact. It is a religious obligation to make Hajj at least once in your lifetime, it is one of the pillars of Islam. Some people were prepared to go, but it was shut down by the [Saudi] government. But perhaps that may be your only opportunity to go.”

And it is not clear when the situation will go back to normal.

How many mosques are there in Rhode Island?

“Off the top of my head, there’s seven or eight in Rhode Island. The Muslim community has grown over the years since I’ve been here. That’s a good thing, but there’s been challenges because you have different cultures coming together from different parts of the world, like Syria, Nigeria, and Pakistan. You have different cultural and ethnicity groups.”

“The Smithfield mosque may look different from other mosques because it was built from the ground up. But that was in recent times. In Smithfield, it was a group of Pakistani professionals who had the resources to get it off the ground and the community, of course, helped with donations. Now, there is another project going on in Pawtucket, which is near completion but the pandemic has impacted affected the building of the mosque. I recently spoke to their President, a doctor from Syria. It’s another indication of the growth of the Muslim community, although there are different cultural groups that are making these efforts. So I think the future looks bright in that sense.”

Currently the Muslim Chaplain at Bryant University and the Chaplain at the ACI [Adult Correctional Institution] in Cranston, RI, Imam Ansari has held various Chaplain positions, including at Roger Williams University, Bridgewater State University, and for the Commonwealth of Massachusetts.

On Bryant’s campus, he wants to see the Muslim Student Association (MSA) blossom in the same way Hillel -the Jewish student organization – has.

“We’re really struggling because of the transition. This is my third semester here; the first semester, we were able to get a Charter and get the MSA up and running. Some of the Muslim students who initiated it were seniors and have left. That’s a void I have to fill.”

“My hope is that we will continue to grow the MSA and let the students use the space the university had provided for them as a sacred space. But one of the problems that I’ve run into is that students take classes on Friday. For students it’s difficult to navigate; they may only offer certain classes then. They need to know that when they’re selecting classes. But the two sophomores that I just met, I let them know that there is a place where they can come during the interval when they’re not in class. I would like to establish a time among these Muslim students, when they do have an opportunity to come, to instruct them on the importance of their religious obligations.”

This document is currently not available here.