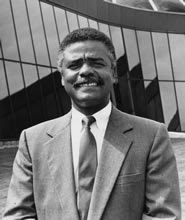 Dr. William E. Trueheart, executive vice president of Bryant from 1986-1989, became the sixth president of Bryant on August 1, 1989. Trueheart was the first and only black college president in New England up until this time. He was inaugurated on October 22, 1989. He holds a bachelor of arts in political science from the University of Connecticut. He received a master of public administration degree in 1973 and a EdD in education and social policy in 1979, both from Harvard University. While earning his advanced degrees, Dr. Trueheart was a Ford Foundation Fellow, a Littauer Fellow, and a Travelli Fellow. From 1983 to 1986, Dr. Trueheart was associate secretary to the Office of Governing Boards at Harvard University. Prior to that, he was assistant dean and director of the master in public administration program at the John F. Kennedy School of Government at Harvard for three years.