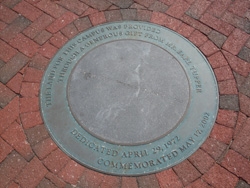 Bryant's undeveloped campus in Smithfield was originally called the "Tupper Campus on Memory Hill" after Earl S. Tupper, who donated 220 acres to Bryant in October of 1967. This parcel, which is now the site of Bryant University, was known as Memory Hill Farm and was valued at $300,000 at the time of Tupper's gift. In making the gift Tupper stated, " I'd considered a lot of different possibilities for the land and none of them quite had what it takes. Bryant College [now Bryant University] is a type of school that is providing a type of education very much needed, so you sort of like to give something to a school like that." Tupper was the former president of the Tupper Corporation, manufacturer of Tupperware.

Bryant's new campus, a.k.a. "Tupper Campus," was dedicated on April 29,1972. A "Tupper Campus" sign was once located at the entrance to the school. A commemorative plaque to Tupper is now located at the beginning of the main walkway to campus. This plaque was placed on the walkway in 2002 during campus renovations and reconfigurations.