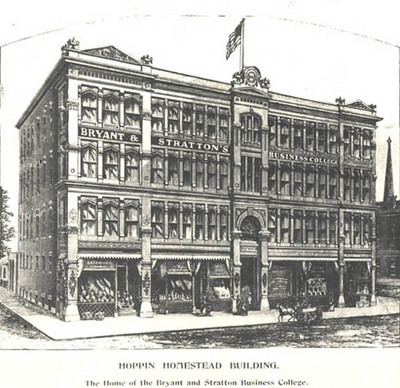 Drawing of the Hoppin Homestead building (circa 1878-1892) located at 283 Westminster Street, Providence, RI. This four-story building, designed by James C. Bucklin, was erected in 1876 and housed the Bryant and Stratton Business College from 1878 to 1916. The College occupied the third and fourth floors of the building with retail shops such as Warren and Wood, importers of crockery, occupying the ground floor. The building was considered quite modern with its 16,000 square feet of floor space, a massive mahogany staircase and an elevator that served all four floors. The building's location was fortunate in that it was surrounded by the bustle of late nineteenth century Westminster Street with its many shops, theaters and other businesses. The building changed hands many times after Bryant and Stratton's move to the Butler Exchange building in 1916. The Hoppin Homestead building was demolished in 1979.